I hope you use this page as a resource to enjoy all 6 audiobooks of the Hitchhiker's Guide to the Galaxy trilogy for free.  Click the book cover art for more detailed information from the Hitchhikers Wiki on each specific book.

Please share with all your friends and enemies who might find these books entertaining.  Don't Panic and Enjoy! 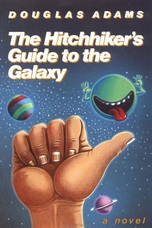 Book 1) The Hitchhiker's Guide to the Galaxy - Buy on Amazon

The Hitchhiker's Guide to the Galaxy begins with contractors arriving at Arthur Dent's house, in order to demolish it to make way for a bypass. His friend, Ford Prefect, arrives while Arthur is lying in front of the bulldozers, to stop them from demolishing it. He tries to explain to Arthur that he is actually from a planet somewhere in the vicinity of Betelgeuse and that the Earth is about to be demolished. The Vogons, an alien race, intend to destroy Earth to make way for a hyperspace bypass. 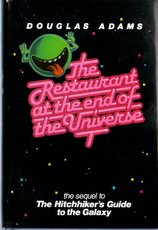 The Restaurant at the End of the Universe begins just as The Hitchhiker's Guide to the Galaxy ended. Arthur Dent, Ford Prefect, Trillian, Zaphod Beeblebrox and Marvin have just left the planet Magrathea when they are attacked by a Vogon ship commanded by Prostetnic Vogon Jeltz. They find they are unable to use the Improbability drive to escape, as Arthur has accidentally jammed the computer with a simple request for a cup of tea which proved a rather difficult problem. Luckily, an ancestor of Zaphod's, Zaphod Beeblebrox IV, saves them. 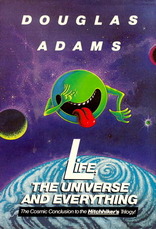 Book 3) Life, the Universe and Everything - Buy on Amazon

Life, the Universe and Everything begins five years after the events of The Restaurant at the End of the Universe. After being stranded on pre-historic Earth , Arthur Dent is met by his old friend Ford Prefect, who drags him into a space-time eddy, represented by an anachronistic sofa. The two end up at Lord's Cricket Ground two days before the Earth's destruction by the Vogons. Shortly after they arrive, a squad of robots land in a spaceship in the middle of the field and attack the assembled crowd, stealing The Ashes before departing. 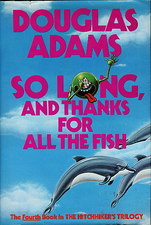 Book 4) So Long, and Thanks for All the Fish - Buy on Amazon

So Long, and Thanks for All the Fish begins three years after the events of Life, the Universe and Everything and eight years after the events of The Hitchhicker's Guide to the Galaxy. Arthur, who has apparently hitched a ride all the way to the spot where the Earth once was, is shocked to find the planet perfectly intact. After hitching a ride with a man named Russell, he finds Russell's sister, Fenchurch, or "Fenny", unconscious in the backseat, and immediately falls in love with her. 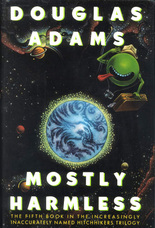 Arthur Dent has continued exploring the universe. He believes that he lives a charmed life, unable to die, due to his encounter with Agrajag; he knows that he is destined to visit Stavromulra Beta and kill Agrajag there before he dies, but nobody has ever heard of Stavromulra Beta. As a result of a shuttle crash, he finds himself on planet Lamuella, where people worship a man named Almighty Bob, and becomes a sandwich maker. After a little while, Trillian comes to see him. Trillian presents Arthur's daughter, Random, to him, for him to look after while Trillian continues her career as a galactic journalist. 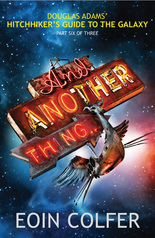 Once you get to here, you are undoubtedly committed to finishing this series. Unfortunately, there is no YouTube video. However, you can utilize Amazon's Audible one month free trial and get a free audiobook.

The Audible App is very well designed and easy to use. You MUST make sure to cancel the trial prior to day 30, unless of course you like the service, to avoid charges.

Even though this book wasn't actually written by Douglas Adams, his close friend Eoin Colfer did a great job emulating his style. There are a substantial amount of "Guide References" in this book, but it is still very enjoyable nonetheless.

We are a participant in the Amazon Services LLC Associates Program, an affiliate advertising program designed to provide a means for us to earn fees by linking to Amazon.com and affiliated sites.