I decided to go “float” for my first time in a sensory deprivation chamber and was immediately distracted by something else I saw in the building.

The owner of Newport Float Therapy told me it was a PandoraStar. It is a device which sends flickering light pulses intermittently at various frequencies to relieve the user of stress and induce psychedelic imagery all while laying on your back with your eyes closed. He insisted I give this a try before going in the chamber to relax my mind and get me ready for the upcoming float session.

Before I delve into the experience, there are some items to note about the science and technology behind it.

If you were to rub your eyes right now, you’d probably see a mixture of dots and other hard to make out shapes. These are called phosphenes. This is the strange phenomenon of "seeing light without light actually entering the eye."

Per the study in Biosystems, phosphenes are:

Playing around with light and phosphenes isn't necessarily a new thing. In 200 A.D., Ptolemy was experimenting with this phenomenon by using the sun and spokes of a spinning wheel to send flickering light at his subjects. They reported having “a feeling of euphoria” and saw various patterns and colors.

The purpose of phosphenes is still inconclusive (similarly to yawning).

”It has been suggested that extraretinal opsins may form some essential component of the circadian clock (Terakita, 2005). However, Purkinje cells of the cerebellum and various neurons in the cerebral cortex and elsewhere have no known relationship to circadian photoreception... It seems that non-visual photoreceptors in the brain can contribute to many more aspects of mammalian physiology than previously suspected.” - Phosphene phenomenon: A new concept | Biosystems

This quote seems to indicate that phosphenes could augment the circadian clock somehow, but the researchers basically have no idea yet. 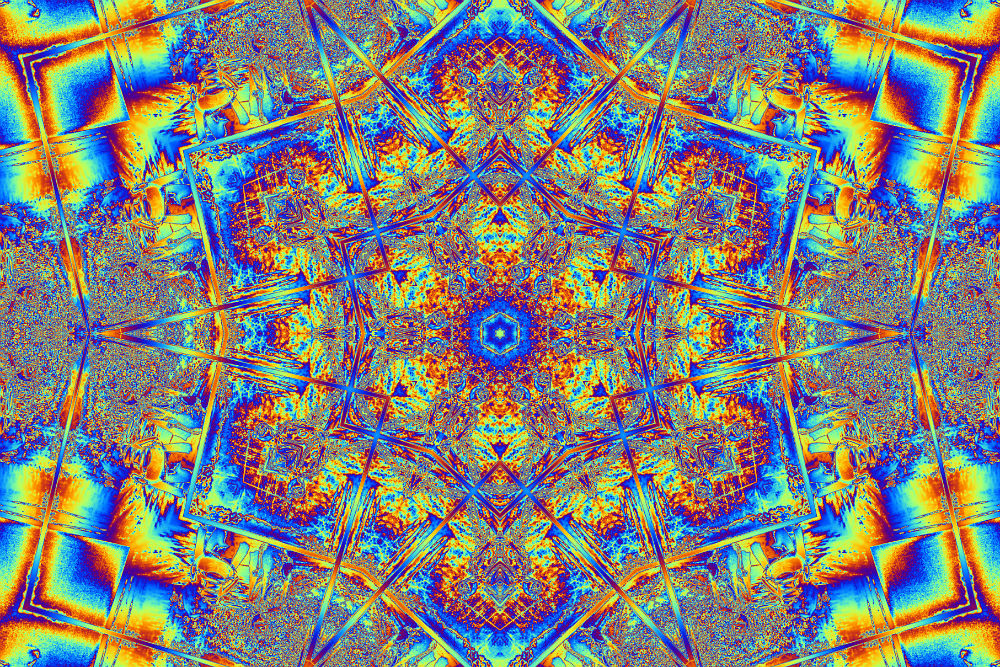 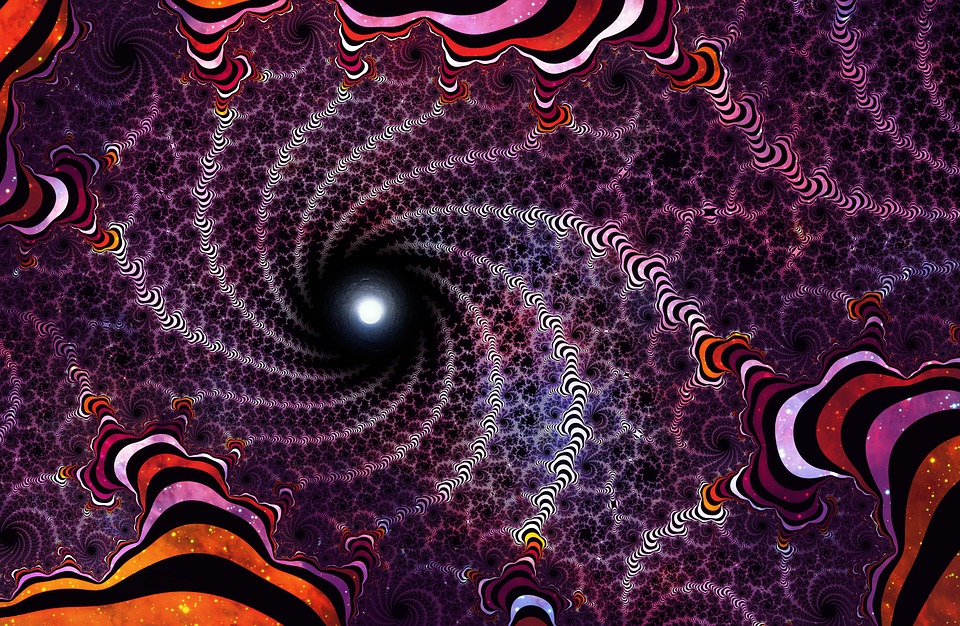 The images above show artists’ depiction of what some psychedelic drug users have experienced with their eyes closed. Strangely, a session under PandoraStar looks vaguely familiar to these images as well.

While under the PandoraStar, the various light frequencies you pick up induce the most incredible and colorful display of mechanical phosphenes without being on drugs.

The science behind brainwave entrainment is even more sparse than phosphenes. It is considered as anything that causes an individual's brainwave frequencies to synchronize and align with a periodic external stimulus such as light, sound, or vibration.

There is a multitude of types of brainwave entrainment:

Binaural Beats is probably the most heard of type of brainwave entrainment. Many people have mentioned that these “songs” can induce drug like effects.

Needless to say, most of these variations of brainwave entrainment do not have serious scientific research supporting therapeutic claims. There was one study done in 2008 that showed a therapeutic benefit for the patients involved, but the researchers concluded further studies were necessary.

Nonetheless, many people have utilized various types of entrainment and experienced positive outcomes. Either the placebo effect is strong or there is therapeutic potential researchers need to begin studying further.

Enter PandoraStar. The PandoraStar does not make any medical claims, but I can definitely say I was incredibly relaxed, happy, and de-stressed after my experience.

It does claim that it can facilitate in “fast reliable brainwave entrainment for a wide range of applications.” Some of these applications include Deep meditation, Relaxation, Stress management, Anxiety reduction, Depression management, Sleep improvement, and much more.

The machine works by sending flickering light waves in various frequency states from .1 Hz to 200 Hz. As noted in this study, there are five types of brain oscillations or waves known as delta (0.5–3.5 Hz), theta (4–7 Hz), alpha (8–13 Hz), beta (15–28 Hz), and gamma (30–70 Hz). The various oscillations have been correlated to governing functional communication in the brain in relation to memory and integrative functions to cognitive processes.

The design takes on sacred geometry aspects of the Star Tetrahedron (Star of David). This is also known as the Merkaba, which represents the seven major chakras. One could easily go down a rabbit hole into the mysticism component.

The specially positioned LED lights can create interlocking shapes and series of hexagrams. Through the multitude of specifically focused light patterns, one can program many different types of “visible” entrainment ranging from colorful kaleidoscopic patterns to heavy psychedelic imagery. One thing that would make the visuals even more surreal would be experiencing it with specially created music that syncs directly to the visual motion. 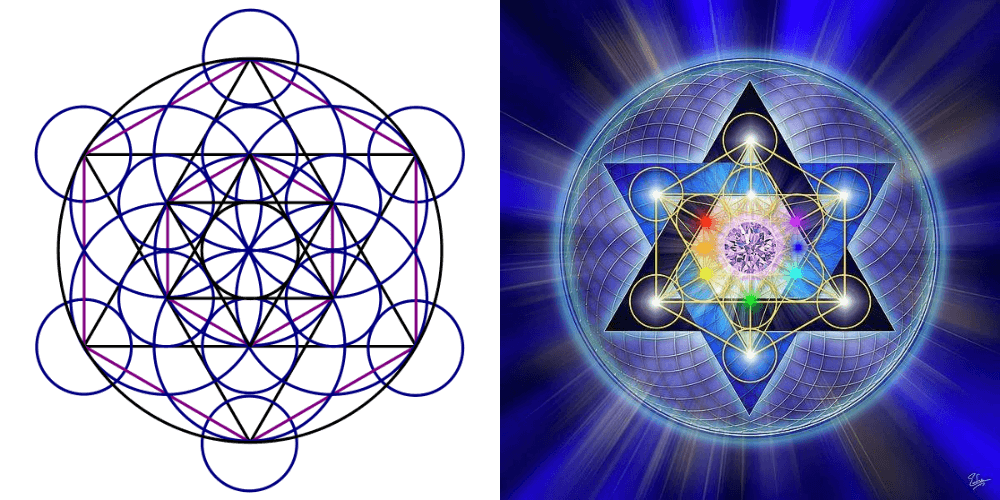 As I laid on my back with eyes closed and noise cancelling headphones on, I couldn’t stop smiling as I waited for this unique sensory experience to start.

The music started to play and the initial phosphenes I was still sensing from seeing the light bulbs before I closed my eyes began to fade away.

They were replaced by dreamy green waves that slowly vibrated and oscillated across the scope of field I had with my eyes closed. I felt myself trying to aim my eyes left or down right to see more of these morphing patterns.

It began to warp and intensify with predominantly red, yellow, and white light orbs that were kaleidoscoping in a beautiful pattern. It turned into a massive fractal that was like watching a zipper unzip itself continually while spinning back into itself.

The psychedelic imagery that I perceived was absolutely astonishing and incredible. There were moments in which the audio would match the visual effect perfectly. One moment a spinning vortex went across my field of vision, paralleling a reverberating synth pad transitioning from one ear to the other. It truly is difficult to put the experience into words.

After going on this 30 minute journey, I felt so incredibly relaxed and at ease, I just wanted to lay there and go to sleep. I literally felt high and giddy as Ron, the owner, showed me to the sensory deprivation tank I was about to go in. What a trip!

This video is similar to the sensation you would “see” when under the PandoraStar, but it still doesn’t come close to the actual experience.

Read Part 2 regarding the sensory deprivation float therapy session and the science behind that! 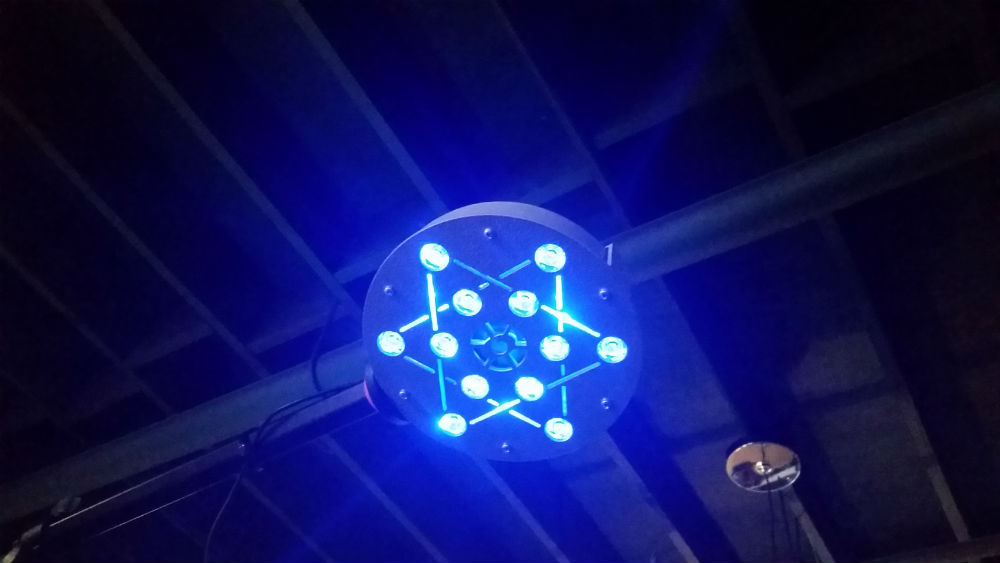