The most recent report to have come out of the United Nations Development Programme in terms of education rankings seem like they should be highly encouraging. The United States ranked fifth in the world in terms of how long our students are participating in education, putting us in the top 2.5% of nations in the world. While the quality of the education being received can be (and often is) debated, the evidence is clear. The number of nations whose citizens are spending more time receiving an education than the U.S. can be counted on one hand.

Unfortunately, a more detailed examination shows that this distinction is far from being evenly distributed across the nation. A National Center for Education Statistics report for 2012-2013 showed that, while Iowa had a 90% high School graduation rate of 90%, in Oregon the rate was only 69%. (No data was available for Idaho.) 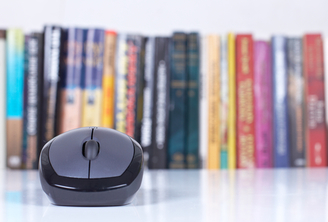 One solution to this gap that is being explored is the concept of the “Virtual High School”. The idea is to provide educational programs across distance that are focused on meeting the needs of students that might otherwise drop out before graduation. By going online, a bare-bones high school without the budget to afford better than basic coursework can connect students with classes more tailored to their specific needs being taught in another school across the district, or even across the state.

This method of blending traditional learning taught locally with online learning tailored for individual student needs has shown promise. According to a recent Parent Today article (publically available here) disadvantaged school districts in New York have been able to offer classes previously unavailable. Marc Weiss, who teaches social studies, praised the changes that the state virtual learning program has brought. “The program really opens up the students to having more Advanced Placement classes. It puts small schools or rural schools like us on par with urban or suburban districts.” 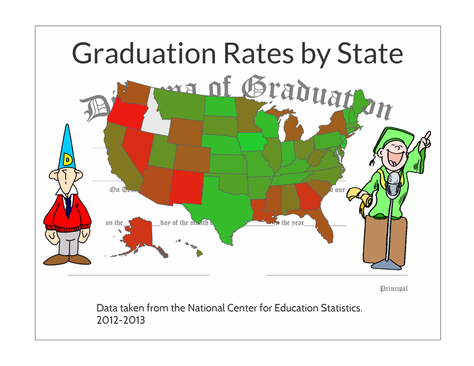 He’s far from the only educator to be exploring the ability of the Internet to bring educational opportunities to previously disadvantaged students. Dr. Sharon Stoerger is an online instructor for Rutger’s University’s online program. She has been researching the use of Internet and mobile devices such as cell phones and tablets to help reach students who previously would have struggled with traditional education methods. In the Handbook of Mobile Learning she wrote “A large number of students also asserted that the use of these devices helped them perform better in the course. Moreover, students noted that the integration of mobile activities into the curriculum as a good use of their time and supported their learning outside the classroom.”

The problem is that, while these programs are showing that online education can help meet student needs in new ways that previously had been unavailable, the infrastructure needed to bring the education to many students is sadly lacking. The same areas of the nation that are struggling hardest to meet the needs of students in a way that will keep them in the classroom are also the same areas with the least investment in broadband infrastructure.

In comparison to other nations, the United States comes in 28th on the list when comparing broadband speeds, only one position ahead of Estonia. At only 34.56 Mbps, the U.S. doesn’t even begin to compete with tech savvy nations like South Korea (61.41 Mbps) or Japan (67.32). Internally, that poor showing only gets worse for many portions of the nation. A State Tech report from the same year as the graduation rankings revealed that top ranked Delaware was accessing the Internet with three times the speed of bottom ranked Arkansas. 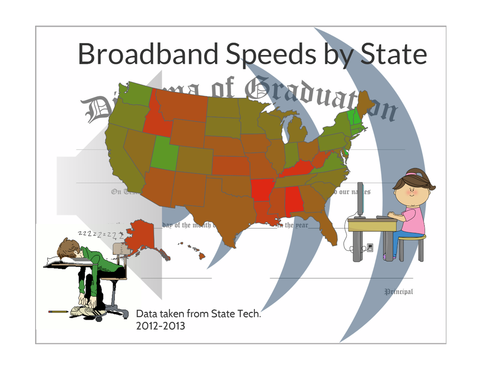 When comparing the two different charts, certain things stand out. In both terms of graduation rates and broadband speeds the New England states and the Midwest both tend to be greener. Meanwhile the Deep South and the West tend to have a great deal of crimson. In the regions with the greatest need for technologies that encourage students to stay in school, the access to the necessary Internet speeds is smallest.

The question, of course, is why? Unfortunately, the answer is simple. Money.

Broadband infrastructure is created based off of a simple cost to benefit ratio for Internet service providers. In order to remain in the green, ISPs like Comcast and Time Warner need to be able to bring in the largest amount of income for the smallest amount of expenditure they can manage. Naturally, the simplest way to do this is to prioritize installing broadband infrastructure where the smallest amount built can reach the most paying customers. When you compare the Broadband Speeds chart with a population chart of the U.S. or a chart showing per capita incomes, they closely correlate.

To make things worse, this is a self-replicating problem. A study from the University of Southern California revealed that access to Science, Technology, Engineering, and Math degrees greatly improved the earnings of disadvantaged populations. If access to these degrees can be the key to significantly improved incomes, then the lack of high speed broadband access will keep the areas that most need those improved incomes in a state where the keys to it are out of reach.

Back in February President Obama broached the topic of expanded broadband access during his budget speech. “If we don’t have a vital infrastructure, if we don’t have broadband lines across the country, if we don’t have a smart grid, all that makes us more vulnerable.” His words were in regards to national security, and not in terms of educational opportunities, but they remain just as true in the later as in the former. We may currently enjoy the fourth longest educational engagement as a nation, but with entire areas of the nation cut off from modern educational opportunities, how long can that last?

The case, then, is made. Broadband infrastructure improvement is necessary for the U.S. to maintain its status as a leader in education in the world. It’s really that simple.