Some people believe that walls separate rooms. Others believe that they join them. In between its financial juggernaut Google and the healthcare divisions of Calico and Verily, Alphabet has an opportunity to tap into the $3.4 trillion dollar U.S. healthcare system.

Larry...regarding those moonshots. Nothing wrong with a future of nano-diagnostics, surgical robots, and genomics, but we have present day issues where Alphabet can help (and profit) in a big way. Consumer and employer pricing for healthcare services, coverage, and drugs are now at nosebleed levels.

A fifty-plus year fee-for-service system has seen its greatest days pass. Many publicly owned health industry players (and their private competitor counterparts) chose to put profits and shareholders before consumers. As a result, costs skyrocketed, quality of care diminished, we have 12 million misdiagnoses per year, and medical related deaths are the #3 killer in America.

The healthcare system is transforming. Instead of providers paid by the number of visits and tests they order (fee-for-service), their payments are now based on quality, value and accountability (value-based care). This means that hospitals, doctors and other medical facilities, in coordination of care, must determine and shoulder the risk of cost in providing care.

We’ve known for a long time that Medicare would grow as baby boomers aged, but the Affordable Care Act (ACA) has resulted in Medicaid growing faster too. Commercial plans such as Aetna are also planning major shifts to value-based reimbursement. This revenue mix of patients will put a strain on the bottom line of all hospitals and providers.

Several important changes are now occurring. First, value payments will be based, not only on set costs, but also an expected level of quality, patient satisfaction of care, and outcome. Second, we are seeing the formations of Accountable Care Organizations (ACOs) as many patients see several different types of providers per episode. Insurers will look to make single, bundled payments, split between these providers accordingly.

The basis for this Alphabet play centers on creating a new division called Salus. Its purpose - to engage in a semi-organic growth strategy with key acquisitions based on data & capabilities. Then to apply those assets into their core expertise of DeepMind artificial intelligence, amplify, and shine that light back into the darkness of a healthcare market needing to transform.

Alphabet is no stranger to semi-organic growth (a term coined by UCLA Anderson teaching legend George Geis), as it is a master of adding talent and technology from its acquisitions, then using its own resources and culture to accelerate the potential of the acquired properties. It started in 2003 with the purchase of Applied Semantics for $102 million, resulting in adding $13 billion over the next 10 years. Alphabet (nee Google) has also done this with a number of its 150+ acquisitions since.

In the image below, you will see the following proposed play: 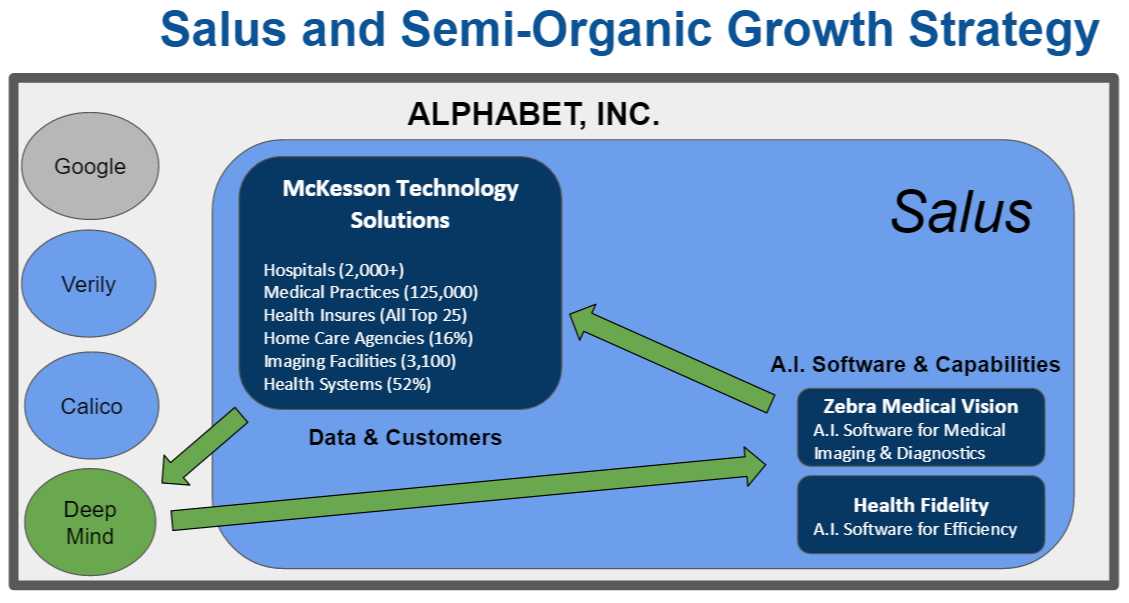 1. Acquire McKesson Technology Solutions
McKesson is a $188 billion dollar per year organization, but only $3.1 Billion is for healthcare electronic health records, infrastructure, imaging, and consulting services. The other 99% is for drug distribution, for which they are applying a greater future focus.

As of June 2016, they are seeking to shed their IT unit. Note the strong and diverse industry customer base they carry - ripe with imaging, medical claim, diagnosis and medical service data. An 18% profit margin isn't bad - but they simply don't have the finances to sustain the needed R&D costs to compete with the likes of Cerner and Epic.

2. Acquire Zebra Medical Vision and Health Fidelity.
Zebra is an AI software solution that utilizes deep learning and neural networks to read all types of medical imaging. Zebra has accumulated one of the largest anonymized databases of medical imaging and clinical data available. They are a private, VC-backed company currently partnered with Intermountain Healthcare and Dell Healthcare.

Health Fidelity is also private - backed by $19 million in funding from mega health system UPMC. Its solution uses 'groundbreaking Natural Language Processing (NLP) and analytics technology' for identifying and quantifying risk for hospitals and physicians. This AI technology helps ACOs, hospitals and providers to lower cost and improve quality of care. In addition, NLP will be key in future accurate and efficient handoff between man and machine.

Alphabet will follow its typical mindset of semi-organic growth, where it retains, empowers, incentivizes, and 'culturalizes' the employees of its new acquisitions - rather than replacing them. The Salus division will continue to acquire other AI-related health vendor startups, central to improving diagnostic accuracy and cost/quality/outcome efficiency in the healthcare industry.

Once Deep Mind utilizes these data points, its powerful technology can amplify the current technology solutions of Zebra and Health Fidelity. They will grow even stronger in their speed and accuracy, with leading AI from DeepMind forming the backbone.

Our healthcare system and crisis dictates that millions of providers, facilities, and insurers will need more efficiency, greater safety and less cost in providing and covering care. We are at a point where the limits of human capital and manual decisioning has shown their limits and shortcomings. Mass consumer unaffordability, 251,000 lives not needing to be lost, and massive misdiagnoses serve as the clearest red flags.

Alphabet has a unique opportunity to help human lives, the medical industry, and profit at tremendous levels. Its ethos of semi-organic growth strategy to acquire data and capabilities, coupled with industry-leading DeepMind AI, will deliver its new Salus division into a new era of American health.

Future competition exists through IBM's Watson, especially per their acquisitions of Merge, Truven and Phytel. However, I believe that healthcare companies are not going to want to feed in their own data, and create their own algorithms, in order to get predictive analytics from the powerful Big Blue.

They will be so busy focusing on driving greater patient load, employing superior efficiency and monitoring outcomes and patient satisfaction, that they will prefer software solutions, backed by AI that automatically grows stronger and more accurate through its use and existence.

Human interaction and decisioning will ultimately remain at the top rung, as our healthcare system moves forward. However, AI will necessarily play a far greater role. To what degree dictated by a combination of trust, positive experience, and the same profit motive that put the U.S. system in its current crisis.