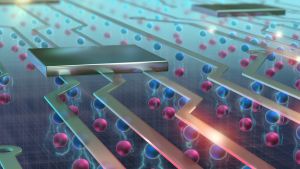 Get ready to get excited about excitons.

Excitons are quirky quasiparticles that exist only in semiconducting and insulating materials. Recently, a team of researchers in Lausanne, Switzerland discovered a way to control how excitons flow. Not only that, they also discovered new properties of the particles which they claim could lead to a new generation of electronic devices with transistors that lose less energy as heat. The results of their study were published this week in the journal Nature Photonics.

The Buzz About Excitons

Excitons are created when electrons absorb light, moving to a higher “energy band” and leaving behind an “electron hole” where the electron was previously. Because the electron has a negative charge and the hole has a positive charge, the two are bound together and become known as an exciton. They are particularly easy to manipulate in 2D materials, such as those with a basic structure only a few atoms thick like carbon.

The research team from the École Polytechnique Fédérale de Lausanne (EPFL) found that by using a laser to generate light and slightly shifting the position of a 2D material they could use excitons to change some of the properties of the light.

One property of excitons, their valley, relates to how much energy they have. By manipulating these valleys and properties of light we can code information on nanoscopic scales. The process, known as valleytronics, is very similar to the binary 1’s and 0’s that make up the basis of all computing.

“Our research showed that, by manipulating excitons, we had come upon a whole new approach to electronics,” said Andras Kis, who heads the Laboratory of Nanoscale Electronics and Structures at EPFL. “We are witnessing the emergence of a totally new field of study, the full scope of which we don’t yet know.”

The post A Physics Breakthrough Could Lead to a New Generation of Advanced Electronics appeared first on Futurism.